Malaga is one of eight regions in Andalucia, the largest autonomous community (self governed region) in Spain.

The capital of the region is the city of Malaga.

Malaga is served by a busy international airport, which has regular flights from and to:

You can find more information on flights to and from Malaga at the following websites:

To find the first cultural enclave settled over the capital we must trace back to the first millennium BC, when the Phoenician colonization of the southeastern coast of Andalusia begins with the founding of Gadir (Cadiz) in 1100 BC by the Phoenicians from Tiro, which was followed by the foundation, by these same settlers of Malaka (Malaga), Sexi (Almunecar) and Abdera (Adra), around 800 BC, however It would be more correct to speak of commercial establishments of factories than cities by themselves.

Either way, Malaka is the first cultural enclave on the demarcation of the current capital of Malaga which has historic news. Finally, it should be noted that establishment of these Phoenician factories along the southeastern coast of the Iberian peninsula had to be done on an Iberian ethnic base.
Subsequent to the Greek colonization which made Malaga look like what is now the capital of the province, Malaga was dominated for over sixty years under Carthaginian, after the Punic Wars, just in the year 202 BC with the Roman victory and the transit of Malaga to the orbit of the imperial victors in the area of Hispania Ulterior (Andalusia during the aegis of Augustus, until 14 AD). During these years, the Municipium Malacitanum was a transit point within the Herculean Way, a true economic and cultural catalyst for the city , to communicate it to other enclaves developed in the interior and Hispania with the other ports of the Mediterranean. From this period dates back the Roman theater that despite its small size (a cave, 31 m of radio and a lump sum of 16 m.), is one of the oldest of all Hispania.

In the year 325, when the Nicea Council was celebrated , Malaga appears as one of the few Roman enclaves within the peninsula where there were strongly rooted Christian creed. Prior to this date,frequent uprisings had been taking place in the city because of feelings against the romans precisely because this opposition to paganism.

After the split of the Roman Empire, and during its final crisis, Malaga falls within the areas of the peninsula affected by large migrations and settlements of Germanic people, particularly the vandals silingios, which during the century V are importing creed from the East.

In the early eighth century begins the collapse of the monarchy GODAE and, in the middle of this century, the penetration of Islam into the Iberian peninsula from the shores of North Africa. Malaga definitely fell in 743 within the influence area of the Arabs .
In the fourteenth century were the first attempts from the Christian troops to reconquer the city, but it was not achieved until a century later, after a long siege in which the small elevations around the city played a big role. Once Malaga was taken, on August 19 1487 the convent of La Victoria and La Trinidad were built . The city began to change in appearance to accommodate the new construction style. It is the time when the city had for the first time a large square, the Plaza Mayor (now known as "Plaza de la Constitution"). From this moment the religious communities begin to play an important role in the urban growth of Malaga. The churches and convents built outside the protected city began bringing people together and leading later to the formation of suburbs outside. 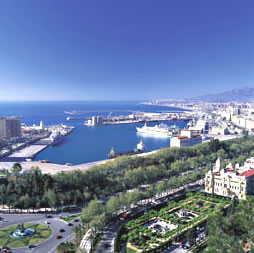 The XVI and XVII Century were hard for the city, not only because of the consequences that led to the lifting of the Moors and their subsequent expulsion, but also because the epidemics and floods caused by the river Guadalmedina. During this time was the construction of the city port. With the advent of the eighteenth century the city began to recover and this produced a further expansion of the port and the resuming of the cathedral construction, which had been stopped.
In the early nineteenth century Malaga had two well-defined sectors, both situated outside the center of its medieval origin: in the far west the urban landscape began to take shape influenced by the industrial activity of Malaga at that time, meanwhile in the city villas and hotels began to appear according to "Belle Epoque" style. With the demolition of old religious buildings, the city would gain new opportunities for growth. However, the political dilemas of the nineteenth century left painful memories in the city, leading to the shooting of Torrijos and his followers. The century ended under the sign of the economic crisis: the collapse of the fledgling industry, pest phylloxera, and so on. The crisis went further into the first decades of the twentieth century until the'60s, when the boom of tourism started to revive the province of Malaga and the city became a major service center.

What to visit in Malaga

Village nestled at the foot of the mountains. Arab Baths of Majadas. Ruins and fortress of Zalia. Cuevas such as Boquete de Zafarraya, and the Moro y Carrion. National Reserve of the Sierra de Tejeda.

Beautiful white town of narrow cobbled streets, with Arabs reminiscences. Its main activity is agriculture. Fantastic panoramic views of the sea and the mountains. Cortijo del Daire, of archaeological interest.

Cueva de la Pileta: Discovered in 1905, was declared a national monument in 1924. It contains an important set of paintings of goats, horses, deer, cattle, and so on. The remains are preserved since Paleolithic age. It was a burial place. It is the most important cave with cave paintings in Spain. Hours: daily 10 to 13 h. and from 16 to 18 h. Itinerary: 2 hours.

Some of those towns and cities are accesible by train , other by bus. We recommend hiring a car, which will give you the needed freedom for your holidays, with a cheap quality hire company, Visit Malaga car hire deals for further information and free instant online booking without any deposit or credit card.

The main cities and towns in Malaga are Malaga iteself, Marbella, Velez-Malaga, Fuengirola, Mijas, Torremolinos, Estepona, Antequera, Benalmadena and Ronda. The coastline in Malaga is known as the "Costa del Sol" and is one of the main tourist resorts areas in Spain.

You can find lots of information on the province of Malaga at the following websites:

Malaga.us - An excellent site dedicated to Malaga. Includes activities and tourist attractions, sports, maps and all of the towns and regions in the province.

Malaga Turismo - The tourist office of Malaga's site is full of useful information.

Malagaweb.com - A portal dedicated to Malaga, including all the regions and towns in the area.

Andalucia.org - The tourist office site for the whole region gives you a great overview ofwhat else there is to explore in the area.

Andalucia - A site focusing on golf and other activities in Andalucia.

Malagacar.com - When visiting Malaga, a car rental is a very recommended transport option. Popular places and towns are not close to each other and car hire in Malaga will without any doubt help us in getting the most of our holidays in Malaga.

You can find out more information about the whole of Spain at the following sites:

In Spain - A huge resource with literally thousands of pages of information on Spain. Essential for planning your visit.

Maps of Spain - Free maps to help plan your journey. Includes the major towns and cities and all of the regions of Spain.

Car hire Spain - For those who need to rent a car anywhere in Spain, this website offer cheap car hire in Spain.